What is smoke development?

Smoke is probably the best-known side effect of fires - and the most dangerous. In fact, most of the injuries and deaths in fires are not caused by the heat or flames themselves, but by smoke. How much and how fast smoke is released is known as smoke development. A high and rapid development of smoke gas leads to the affected areas quickly filling up with smoke and people being prevented from escaping because the escape route is no longer visible. 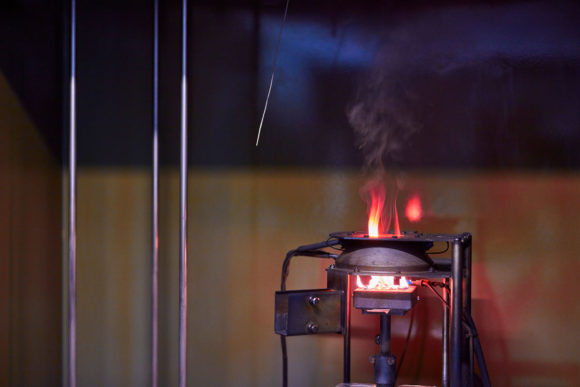 Range of services of our fire laboratory

Depending on the test method, light bulbs or lasers with a wavelength of 632.8 nm (red) serve as light sources for measuring smoke density. Opposite the light source, a detector catches the portion of the light that makes it through smoke.

In many fire tests, smoke is measured dynamically in the exhaust pipe through which the fire gases are extracted. This corresponds to the scenario of a well-ventilated fire, where the resulting smoke gases can escape or are "sucked out" by air currents.

Many fires occur in closed rooms. That is why we also carry out smoke tests in closed smoke density chambers. In these chambers, the smoke collects during the combustion or smouldering of the material to be tested. The smoke density is measured over time. Depending on the requirements, there are normative limit values for the optical density after 4 min (DS4) or the maximum of the optical density (DSmax) in a given test period. For some applications, VOF4 plays a role as a sum parameter for smoke development within the first four minutes.

What are the advantages of smoke emission tests?

Smoke evolution tests allow you to assess the ability of your materials to help people escape to safety in the event of a fire by producing low and slow smoke evolution. This requirement is placed on materials used in rail vehicles and ships. Use our tests for smoke gas development and obtain the necessary proof that the required limit values for smoke gas development are complied with.

Are you in need of smoke emission tests?

Back to fire test laboratory